The common bean (Phaseolus vulgaris L.) is a herbal annual plant, which belongs to Fabaceae family, it is grown by small and large farmers alike, in several production systems. It has much economic and social importance. However, the plant is a host to uncountable fungal, bacterial and viral diseases. Among the viral pathologies there is one known as Bean golden mosaic virus (BGMV), currently spread to virtually every bean production region inBrazil and over the world, causing huge losses season after season. This research's aim was to evaluate the resistance degree presented by fifteen different bean genotypes as to symptomology shown due to infection by the virus on the plants. The experimental design was randomized blocks, with 15 treatments and a witness, Carioca-Pérola cultivar, and compound by four repetitions. Each parcel was compound by four lines of3,0 meters in length and 0,5m apart, accounting for a total of 60 parcels of 6,0mÂ². The analyzed characteristics were: Emergency, incidence, severity, thousand-bean weight, productivity, and chlorophyll content in the leaves. For characteristic incidence, at both 28 and 38 DAS, the genotypes did not prove to be resistant to the disease. For severity the strains PL 38, from the breeding between IAPAR 57 and IAPAR 72, and 93, from the breeding between ESAL-589 e IAPAR 57, stood out with superior results. For a thousand-bean weight, the genotype UFU Roxo 12, IAPAR 57 X ESAL 589 - PL 48, followed for ESAL 589 X IAPAR 57 - PL 148-1, UFU Preto 29, ESAL 589 X IAPAR 57 - PL 93, IAPAR 57 X IAPAR 72 - PL 25, IAPAR 57 X IAPAR 65 - PL194, CARIOCA PÉROLA-WITNESS, UFU Carioca 14 and ESAL 589 X IAPAR 72 - PL 129 was the one that showed the best result. The highest productivity per hectare was from the genotype IAPAR57 x ESAL 589 - PL48 from carioca group. Concerning the parameter chlorophyll content at 28 DAS, the genotypes ESAL 589 X IAPAR 57 - PL 93, ESAL 589 X IAPAR 72 - PL 129, IAPAR 72 X ESAL 589 -PL49, UFU Roxo 12, ESAL 589 X IAPAR 57 - PL 28, CARIOCA PÉROLA-Witness, UFU Carioca 14 showed less infected area and the highest chlorophyll content, and at 38 DAS there was no significant difference among the genotypes. 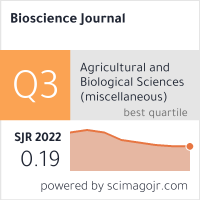